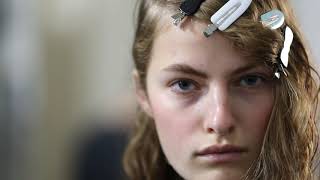 “The look for Michael Kors’ show is pretty simple and based on the idea of a lot of energy in the skin,” says Dick Page. First, apply blush to the apple of the cheek and the bridge of the nose to create a transparent and believable finish to the skin. Insider tip: by doing the cheek color first, you’ll find that you don’t need as much foundation or cover-up. Next, sculpt the eyebrows with a brow gel to tone and add body, then use a clear gel to comb the color through and lighten. For the finishing touches, apply a light concealer under the eyes and around the nose and highlight the eye with a silvery beige eyeshadow.

About Michael Kors
Michael Kors is a world-renowned, award-winning designer of luxury accessories and ready-to-wear. A New York Fashion Week mainstay, Michael Kors has built his namesake company into a byword for effortless, jet set sophistication.

Latest From The Blog

What Our Readers Are Saying